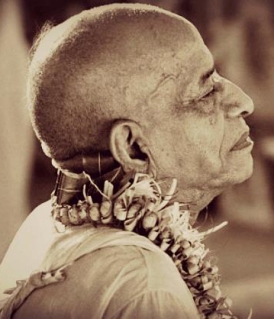 Three months into 2013 and my new year’s resolution remains intact – 30 minutes of exercise every day. Coupled with a slight improvement in diet, I definitely feel much better. Krishna explains that “he who is regulated in his habits of eating, sleeping, recreation and work can mitigate all material pains by practicing the yoga system” (Bhagavad-gita 6.17). A vibrant spiritual life should go hand-in-hand with physical and emotional wellbeing. Feelings of good health, vigour and vitality can help spur on our spiritual endeavours. Coming from someone who previously paid little attention to such matters, I’m happy to say I’ve been won over! Although the body is simply a machine, it pays off to keep it road-worthy.

I have, however, noted an interesting phenomenon in physical training. As the body becomes fitter, the same amount of physical exertion no longer creates growth. Over time, you have to intensify and step up your exercise to keep developing. Even weight trainers will tell you that muscles are developed by squeezing out an extra few push ups, sit ups or weight lifts beyond what you can comfortably do. Building our spiritual muscles is no different. As the years go by, we have to “up the gear” and offer more selfless service, extend ourselves in greater ways, develop our humility and tolerance to a more profound level, and strengthen our determination and enthusiasm. Spiritual life is dynamic; if we aren’t pushing forward, we can easily slip back into laziness, complacency and bad habits.

In worldly spheres, as people grow in age they tend to slow down and do less. Work now, retire later. The youthful years are considered the most fruitful. In spiritual spheres, however, the older years may well be considered the “business end”. As time ticks on, our urgency should increase, our spiritual realisations should mature, and our enthusiasm should grow. Ignore the old cliché about middle-aged dogs and new tricks! Swami Prabhupada was the ideal example. When CNN documented 10 wildly successful people who started their careers after 50 years-old, they included him in that elite list:

The founder of the Hare Krishna movement was 69 years old before he started the International Society for Krishna Consciousness. In his native India, Prabhupada had been a chemist and a Sanskrit scholar in Calcutta, but in 1965 he came to New York City with just fifty bucks, a pair of cymbals, and a desire to spread the teachings of Lord Krishna. Prabhupada got off to a modest start by sitting on a sidewalk in the East Village and chanting, but by the time of his death in 1977 his legions of followers were rumoured to be thousands strong. (Ethan Trex, May 2010, CNN News)